Tell the new IMF chief: bail out people not banks

As Kristalina Georgieva begins her new role as one of the most powerful leaders in global finance — help put the debt crisis at the top of her agenda. 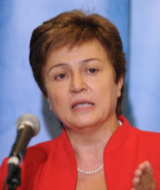 Many countries are being forced to prioritise debt repayments while their citizens suffer cuts to basic services like healthcare and education.

Problem debts need to be written off or brought down to sustainable levels, but the IMF are supplying new loans that fuel the debt cycle. It’s time for urgent action before the global debt crisis explodes.

Our research shows 18 countries that are struggling with debts are receiving a total of $93 billion in loans.

The IMF’s own rules make it clear that restructuring debts should come before issuing new loans. Otherwise reckless lenders are being rewarded while struggling countries become more indebted and ordinary people pay a heavy price.

When citizens around the world have taken a stand against exploitative debt we have achieved huge changes, including billions in debt relief for the most impoverished countries. We can win again if enough of us act.

Debt Crisis – MoUs: Return to the Middle Ages for the working world
February 22, 2020